Culture and Lifestyle in Hisar

Living standards of common masses describe their lifestyle in the areas they belong to. In Hisar inhabitants portray cultural richness in the context of their traditional living standard including the foods they eat, the dresses they wear and last but not the least social and cultural traditions they involve into to maintain their distinctness. People of this region share their joys, happiness and sorrows together to make their lives meaningful. They actively participate in social and religious festivals of each other to maintain the diversity of the society they live in. As Hisar inhabitants represents all major religions faiths this region is definitely a melting pot of culture, tradition and religion. It is here that definitely experience the cultural richness of the area and so do you analyze country’s diversity from this small region. 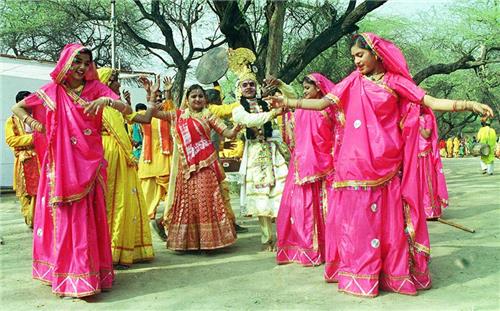 It can be well said that the traditional lifestyle of Hissar is the portrayal of the fusion of cultures since centuries. The region is historically important and therefore also remains in the notice for being a place where some of the Indian religions have their roots and impeccable relations. The traditional lifestyle of this region therefore portrays many such religious and cultural identities having been summed into one cultural identity. Some notable traditional festivals in Hissar is Agroha Maha Kumbh festival which is celebrated during the Sharad Purnima. Worshipping Gugga Pir and Sheela Mata deities are the traditional festivals of this region that distinguish it from rest parts of the country.

People of this region have special eating habits. Milk and curd remain major ingredients of food in Hissar and surrounding areas. Their foods are very much similar to that of Punjab and other areas of Haryana hence they are famous as Haryanavi dishes. Famous foods of this area Makke ki roti (grounded dry corn) & Sarso ka Saag, lassi (sweet yogurt), rajma and cholay-bhature et al are popular ones. An important part of Hissar’s traditional culture is likings of its inhabitants to variety of sweets. People are fond of sweets hence they remain integral parts of their food menus. Take for example the famous Hansi ka Peda which remains popular not only in this region but entire Haryana.


Influence of Western Lifestyle in Hisar

Fast development in Hissar has seen arrival of western lifestyle in many areas of life. Young generations have adopted new food habits and different lifestyle. Young boys and girls of Hissar can be seen wearing jeans and dresses which are very much popular in Western countries. Their foods habits of fast food dishes are common in the area. Fast food joints are wonderful options of healthy and hygienic fast food from this category.

One can find presence of modern gym facilities in Hissar, Haryana. People here have started taking keen interest in joining fitness clubs and gyms. In fact such trends are developing in every nook and corner of the country. One can witness modern state of the art gyms in many parts of the city. Some of them are listred below for reference.

Hissar, being one of the largest urban establishments in the region, has welcomed setting up of many marriage bureaus. They are approached for uploading profiles of boys and girls to managing them through arranging proper interaction between two parties for possible marriage proposals. In fact marriage bureaus play greater roles in turning love marriages into arrange marriages and vice versa. Hissar city based marriage bureaus are professionally trained teams which ascertain that marriages are solemnized in the best possible manner.

Hissar is one of the fast growing cities in the region where people make sure to celebrate every occasion from social to religious or even those strictly confined to the family affairs. By keeping in consideration such ardent needs of the inhabitants and large chunk of visitors each passing of the day, several reputed brands of ice creams parlors operate in this city. They deal into all types of ice creams and so do they offer additional services like arrangements for parties and bulk orders amongst others. Below is listed the ice cream parlors operating in this city.

O. P. Jindal Knowledge Centre is an important landmark in Hissar. There are several entertainment avenues in Hissar that keep inhabitants and visitors well engaged. Krantiman Park in the St. Thomas Church Complex is the oldest park in this region that had been built during 19th century. It was then named Company Bagh. It was renamed to Krantiman Park in the year 1983. Similarly, Madhuban Park nearby Mahabir Stadium is another notable place in Hissar city where swimming pool, children's library and a Kala Kendra always engage visitors. One more important landmark in Hissar city is its famous O. P. Jindal Knowledge Centre. It is not only a center for exploration but equally does it remain crucial to offer good entertainment option. Its museum, library, Herbal Park, skating rink and cafeteria seek the attention of every visitor. Some more places of interest are Deer Park at the city outskirts; artificial lake in the Blue Bird Lake and Tourist Resort complex amongst others. Cinema lovers can enjoy great time watching movies in the Hissar city’s multiplex theaters at Suncity Cinemas in Suncity Mall; M G Cinemas at Mirzapur Chowk in Hissar-Delhi Bye Pass area to other movie theaters that offer good option to the movie buffs. For more information on entertainment in Hisar, click here